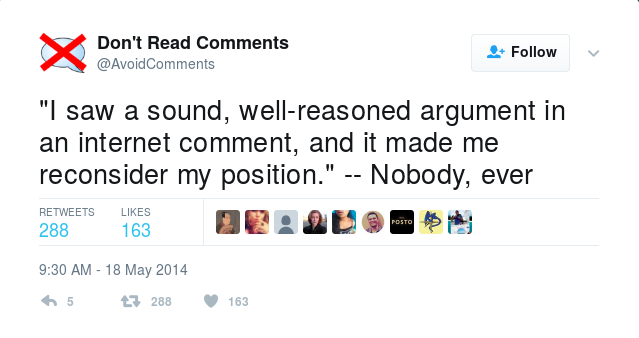 Clichés about free speech are so common in discussions about college speakers that I despair even thinking about it. You can’t swing your arm without hitting at least two cringe-worthy bromides – and both spoken with total condescension and certainty. So to end the despair and to help the self-righteous off their high horses (and to give my arms more room), I’m proposing a radical alternative: let’s look at evidence.

Is unregulated free speech the best way to get the truth? What do the people most serious about pursuing truth think? I suggest starting with scholarly journals, the highly regarded publications that form the backbone of the scientific community. When faced with the decision to publish a paper, do journal editors bark out overused catchphrases about free speech and publish everything? Clearly not. Journals restrict speech radically and extensively. Only a select few authors ever get to publish in the most prestigious journals, and it can take years of effort for them to do so. Editors discriminate so zealously that simply failing to cite the right literature in the bibliography can keep a paper from being published. And far from being a drag, this is the secret to the journals’ success!

Or take another truth-seeking institution – the classroom. When creationists propose that public schools teach creationism alongside evolution, do scientists welcome these proposals as virtuous exercises in “open debate and dialogue”?

Perhaps a third truth-seeking institution will be different: the scientific conference. Do geologists, for example, allow flat-earthers to speak at their conferences because “the solution to bad speech is more speech”? Obviously not.

On the other hand, we’ve all seen the disasters of unmoderated comments sections. Why anyone thinks this kind of wild west free-for-all would be an effective way for college students to learn or debate is beyond me. And due to legal restrictions that prevent public universities from barring bad speakers, “unmoderated comments section” appears to be the current state of college speaking.

To be totally honest I find it hard to care about college speakers, even if the policy is a mess. How much does this actually matter? Very little, in my experience. I suspect this is an overwhelmingly symbolic issue for all sides of the debate. What really annoys me are the allegedly smart people making flat-out unbelievable claims. Are thinking people really supposed to believe that the college speaking tour of Milo Yiannopoulos, the world’s most famous internet troll, is an event that will educate college students? It sounds more like a scene out of the movie Idiocracy. Yet this is an argument I see again and again, without a shred of evidence and without any hint of humility. It’s as if we’ve traveled back to the Middle Ages – what kind of fool would look at evidence when we have the words of the ancient philosophers to rely on? (I will not name the guilty parties to avoid embarrassing anyone. But if they persist I might.)

Anyway, it’s easy to see the solution to this problem. Ideally colleges would be able to enforce policies that prevent self-aggrandizing vile ignoramuses from taking advantage of their lecture halls, in much the same way that a forum moderator would lay out the ground rules for participating in a discussion board. The co-opting of colleges by morons and internet trolls is an embarrassing failure of public policy, not a victory of rationalism.

Officials at the University of California at Berkeley this week canceled a scheduled speech by Ann Coulter, the conservative author, on the ground that the school could not “find a safe and suitable venue” for her. ... It should go without saying that at colleges and universities, free speech is indispensable, and interferences with it are deplorable.

My hot take: It should not “go without saying” that trolls have the right to speak at publicly-funded college facilities intended for education. Trolls are not “indispensable” college speakers, and banning them is not “deplorable”. Colleges would do just fine without them. I am very confident of this. There are many colleges Ann Coulter has not visited. Those colleges have not fallen into barbarism.