According to political betting markets, Gary Johnson, the most popular third-party candidate, has only a 4 in 1,000 chance of winning the election. In all likelihood a vote for Gary Johnson will not elect Gary Johnson— though it may help swing the election from Trump to Hillary (or vice versa, depending on where Johnson’s votes come from). Given that, why would anyone vote for Gary Johson, or any other third party candidate, instead of Trump or Hillary? Voting for third parties must be an irrational and futile gesture, right?

Well, no. This account omits the indirect ways a third party vote can pay off, even when the candidate (invariably) loses.

A third-party candidate’s vote count may determine whether the party can get into debates or onto ballots, which can attract attention and influence the national agenda. Green Party candidate Jill Stein’s views on US drone strikes in the Middle East would likely not be discussed if she didn’t run, or if no one voted for her. The Libertarian Party has attracted new adherents to libertarianism for 40 years by stubbornly fielding candidates in all manner of elections, even though they almost never win.

But still, it would be better to win. Why should anyone even bother with these small-ball benefits when they could help determine the winning candidate instead?

No matter how stark the choice is between the two main candidates in an election, there will always be people in between, and people whose pet issues aren’t represented by either candidate, and radicals who fall off the spectrum entirely. For many of these people, voting for one of the two main parties would be throwing their vote away since they don’t care about the outcome. I can illustrate this nicely on a Nolan chart: 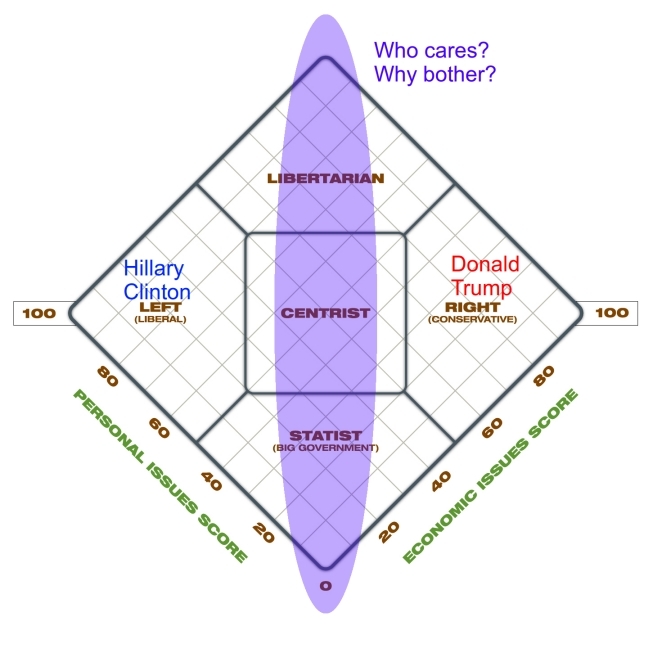 (Original image borrowed from The Advocates for Self-Government)

Libertarians have a good claim to be somewhere in the purple space in between, or off to the side of, the two parties, and therefore indifferent between the two major-party candidates. That two-party apathy probably explains, at least in part, why their third party is so successful. On the other hand, left- or right-wing parties, like the Constitution or the Green parties, face a dilemma. Supporters have to compare the benefits of deciding the outcome of the election, which they may have strong opinions about, vs. changing the agenda.

How does anyone know what to choose in this situation? In individual cases I’m not totally sure how people should be deciding, but I can think of two trends relevant to the decision. The first is that candidates from the two main parties have been gradually moving away from each other on the political spectrum, meaning the outcome of elections have become more important, and therefore voters should place heavier weight on deciding the outcome (as opposed to deciding the agenda). We can see this on graphs from Keith Poole’s Voteview website: 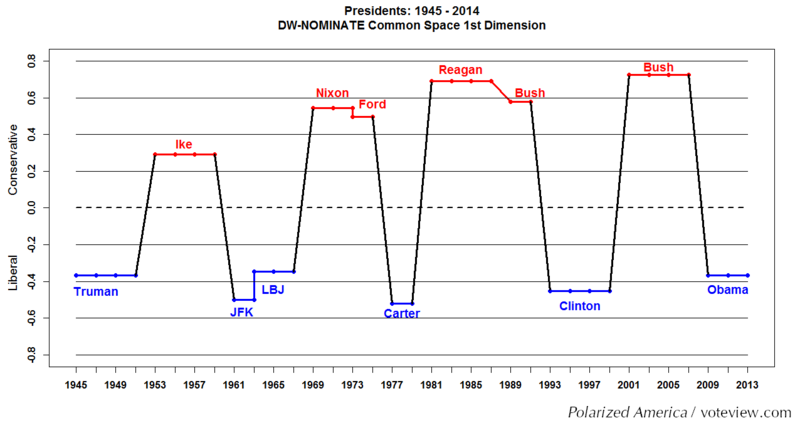 The second trend offsets the first: many states and districts have become less politically competitive, making the outcome of the election a given. Third party voters in these states are unlikely to decide the election and should feel freer to vote for whoever their heart desires. Maxim Lott and John Stossel’s Election Betting Odds website provides a useful map showing the competitiveness of the presidential election in each state. Here’s the current map. Lighter colors mean the race is expected to be closer: 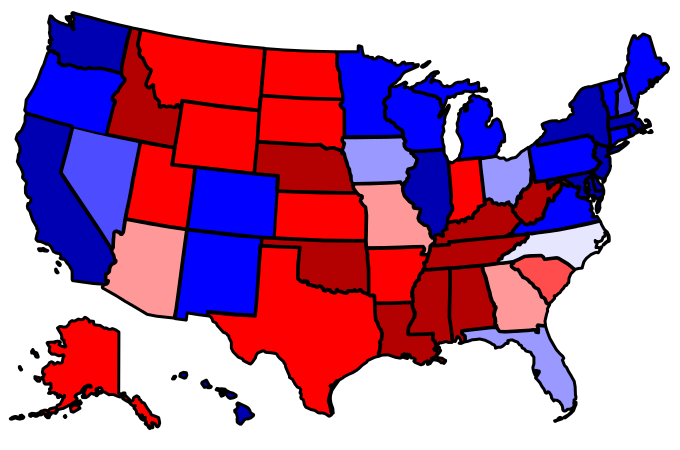 In response to these trends voters in competitive states should become more wary of third parties as time goes on, so I probably wouldn’t vote for the Green Party in North Carolina (even if I agreed with Jill Stein). But in California or New York— why not?

Do third party voters in real life actually make these rational decisions? The statistics required to answer that question are too complicated to attempt in a blog post, and I’m not aware of any study rigorously tackling the subject. But at least anecdotally, it does seem that third party supporters, who are all trying to introduce more options and change the national agenda, are on the right track.