It turns out the old saying is true: men with small hands have tiny job deals.

On the day that Donald Trump bragged about creating 700 American jobs at a Ford factory, the private sector added about 7,000 jobs without his help. It’s been adding those jobs every day for the last 6 years, at a rate of about 2.5 million per year, as unemployment dropped from 10% to 4.7% under the guidance of Barack Obama’s regular-sized hands.

Given the promised Trump economic revival, why can’t Donald Trump find more impressive deals – deals that affect more than 0.001% of the private sector workforce? Surely in a country of 300 million people Donald Trump can find optimistic companies hiring more than a thousand jobs here, a thousand there. These numbers would be great for the mayor of a small city, not an incoming president.

It’s embarrassing that Trump can only display his gold-plated economic brilliance with these meager examples, but I think we should give him the benefit of the doubt– maybe the source of his impotence is that he hasn’t taken office yet. With the powers of the president, will he be able to match Obama’s record?

The answer is “no”. President Obama had it easy in a sense; there was a lot of room for improvement when he came into office in the middle of the Great Recession. Whatever you think of fiscal stimulus or Obama’s economic policies, it’s obvious that we’ve done most of the improving already. The low-hanging job fruit have been picked and at this point even Donald Trump’s genius won’t be able to harvest many more. Assuming no disasters, the economy will probably continue its slow recovery for another year or so and then level off. In fact you can already see the rate of job growth slowing down over the last 2 years, from 3 million per year to 2 million per year: 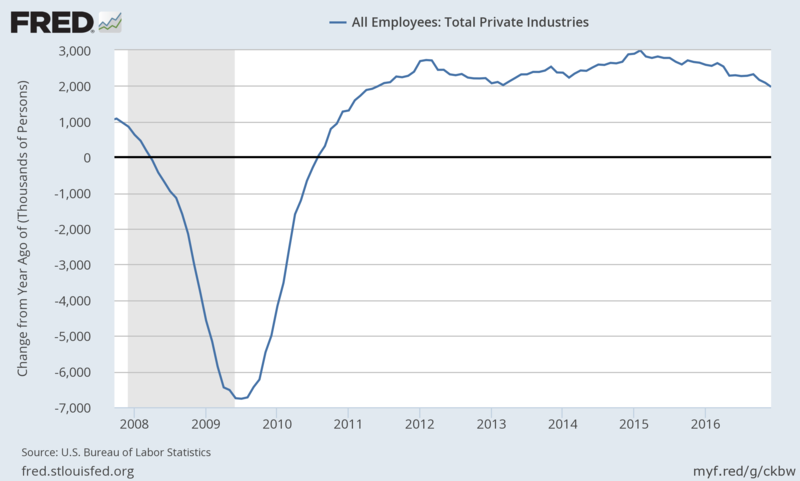 But if not more jobs, maybe he’ll at least get better-paying jobs? Hands notwithstanding, Trump still pledges to bring high-paying manufacturing jobs back from the foreign countries they’ve disappeared to. The pledge runs aground on a minor detail, though– foreigners don’t have those jobs. Many socially-deprived economists have been locked in rooms for years studying this issue, and they’ve concluded that manufacturing jobs were stolen not by foreigners, but by machines! And now, even if Trump does get a few manufacturing plants from foreign countries, thanks to the stiff robotic competition the jobs don’t pay as well anymore.

The economics is clear: Donald Trump’s jobs record will be smaller than his predecessor’s. The hands don’t lie.