Former Congressman Ron Paul is claiming that the Federal Reserve is politicized, and if we don’t change our monetary policy by passing the “audit the Fed” bill we can look forward to “rising interest rates, a stock market crash, a decline in the dollar’s value, and a complete loss of confidence in the US economy.”

Sounds frightening! Thankfully, he gets everything wrong.

First, the Fed is careful about raising interest rates. If the stock market or the economy show signs of impending trouble then the Fed will stop raising rates. In fact this has happened over and over for the last 8 years.

And if the stock market did crash the value of the dollar is unlikely to decline. Bad economic times prompt people to save rather than spend their income. That means there are fewer dollars competing for each good and, if anything, prices go down. (This is why inflation has been historically low for the last 8 years as we recover from the Great Recession.)

Finally, there’s little reason for anyone to lose confidence in the US economy even if there is an economic disaster. We’re still the wealthiest nation on the planet. Our government still has a strong track record of paying its bills, which allows it to borrow at low interest rates. We still have all the people and machinery and technology we had before the hypothetical stock market crash. After the Great Recession, the dollar actually gained value internationally because investors viewed the US as a safe bet.

But beyond the purely economic nonsense, Ron Paul’s solution – the audit the Fed bill – wouldn’t fix any of this. While Paul presents the Federal Reserve as a secretive institution in need of sunshine, it already gets plenty of light. Economics writer Catherine Rampell summarizes the facts in an excellent article:

The Federal Reserve Board and its 12 affiliated regional Fed banks already undergo an audit. Multiple layers of audits, in fact, by the Government Accountability Office, the Office of the Inspector General and independent private auditors such as Deloitte. The Fed also releases weekly data about its balance sheet and the minutes from its closely watched Federal Open Market Committee meetings with a three-week delay.

In reality the bill would give legislators more opportunities to pressure the Federal Reserve with no other practical effect. Economists worry political pressure will lead the Fed to give the economy an unsustainable boost during elections, causing inflation. Ron Paul's example of Arthur Banks and Richard Nixon shows this concern is no joke. Under Banks’ watch, inflation rose to double digits. Ironically, while Paul is know for decrying inflation, that's exactly what economists fear this bill will bring.

All of this is why, when surveyed, economic experts strongly disagreed with Ron Paul’s views: 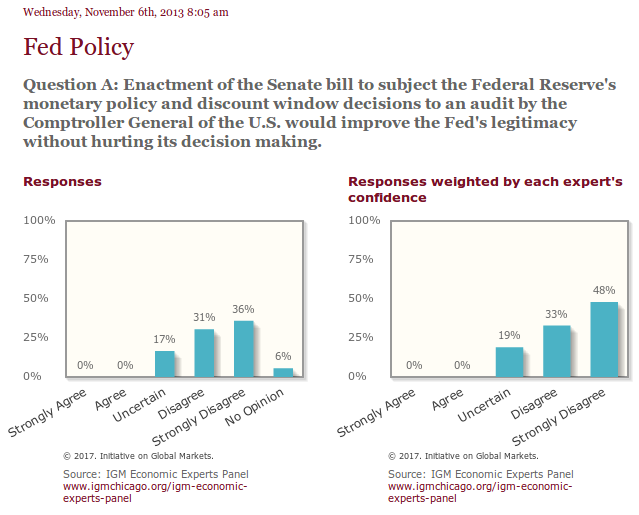 The experts are right: there’s no reason to support this bill.