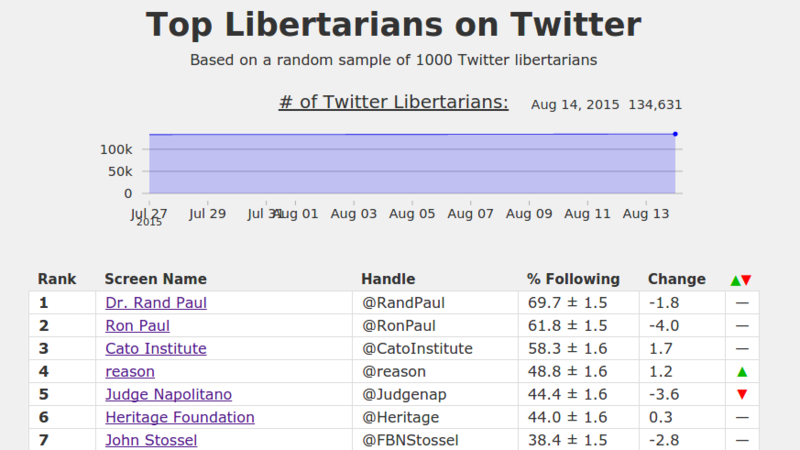 About 70% of Twitter libertarians follow Senator Rand Paul, according to samples I’ve been collecting, making him the top libertarian on Twitter. Next are Ron Paul (about 63%), the Cato Institute (56%), Reason magazine (48%), and Judge Napolitano (46%).

To find Twitter libertarians, I rely on the statistical finding that Twitter users tend to follow accounts that reflect their own ideologies. (See paper 1, paper 2) So I put together a list of 22 popular libertarian Twitter accounts, and downloaded lists of their followers from the Twitter API. If a person follows 3 or more of the accounts, I assume that he or she is a libertarian.1

From the resulting list of Twitter libertarians— more than 134,000 at last count— I randomly select 1000 to see who they’re following. Interested readers can view the results at willonrails.com/top_libertarians.2, 3, 4

Although I usually focus on the more radical elements of the libertarian movement, the beltway libertarians— that is, the relatively moderate libertarians who work on or write about policy for a living, often in the “beltway” of Washington, D.C.— dominate the top of the list, along with some Fox News hosts and conservative Twitter accounts. Of the more radical, openly anarchist libertarians, Adam Kokesh, known for promoting a “final American Revolution,” is the most popular with 14% of libertarians following his account. Jeffrey Tucker, a much nicer anarchist, comes next at 9%. Stefan Molyneux, an anarchist and Men’s Rights Activist who describes himself as the “greatest philosopher alive,” exerts a smaller influence at about 6%.

I plan to update this every Friday evening, with the hope that other interested researchers and I can use this data to test hypotheses about how ideological groups evolve over time. (But no guarantees!) Are libertarian extremists becoming more or less influential in the movement? How does Twitter popularity change in response to economic or other social conditions? I keep wishing I had some data on this, so now I’m making some.